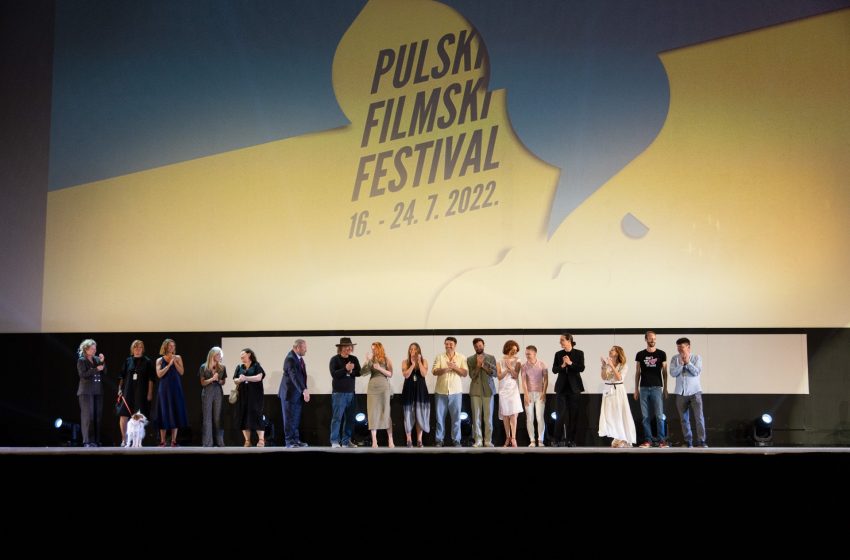 The film Even Pigs Go to Heaven, directed by Goran Dukić had its world premiere last night at the Arena. It is a dramedy that takes us back to 1991, when the whole of Croatia was facing war, while the Zagorje region had its own stories. One of these stories is the disappearance of the hog Beba, who the owner Anka wants to breed with the local pig, leading to a range of twists and turns that include personal, local, and political motives. The film was screened in competition in the Croatian Programme, and was followed by the screening of Heavens Above, directed by Srđan Dragojević, from the International Programme. Heavens Above is a minority Croatian co-production, and follows three stories set in 1993, 2001 and 2026. The first story, Sin, follows the kindhearted character Stojan, who receives a halo as a gift from God, which creates problems for him in the neighbourhood, but also in his marriage. The second story, Grace, follows Gojko, a deeply religious young man who believes his mobile phone can give him a direct connection with his favourite saint, St Petka. The third story, The Golden Calf, also follows Gojko, but this time he is a painter and his canvases are extremely powerful – so powerful, in fact, that they can sate hunger. 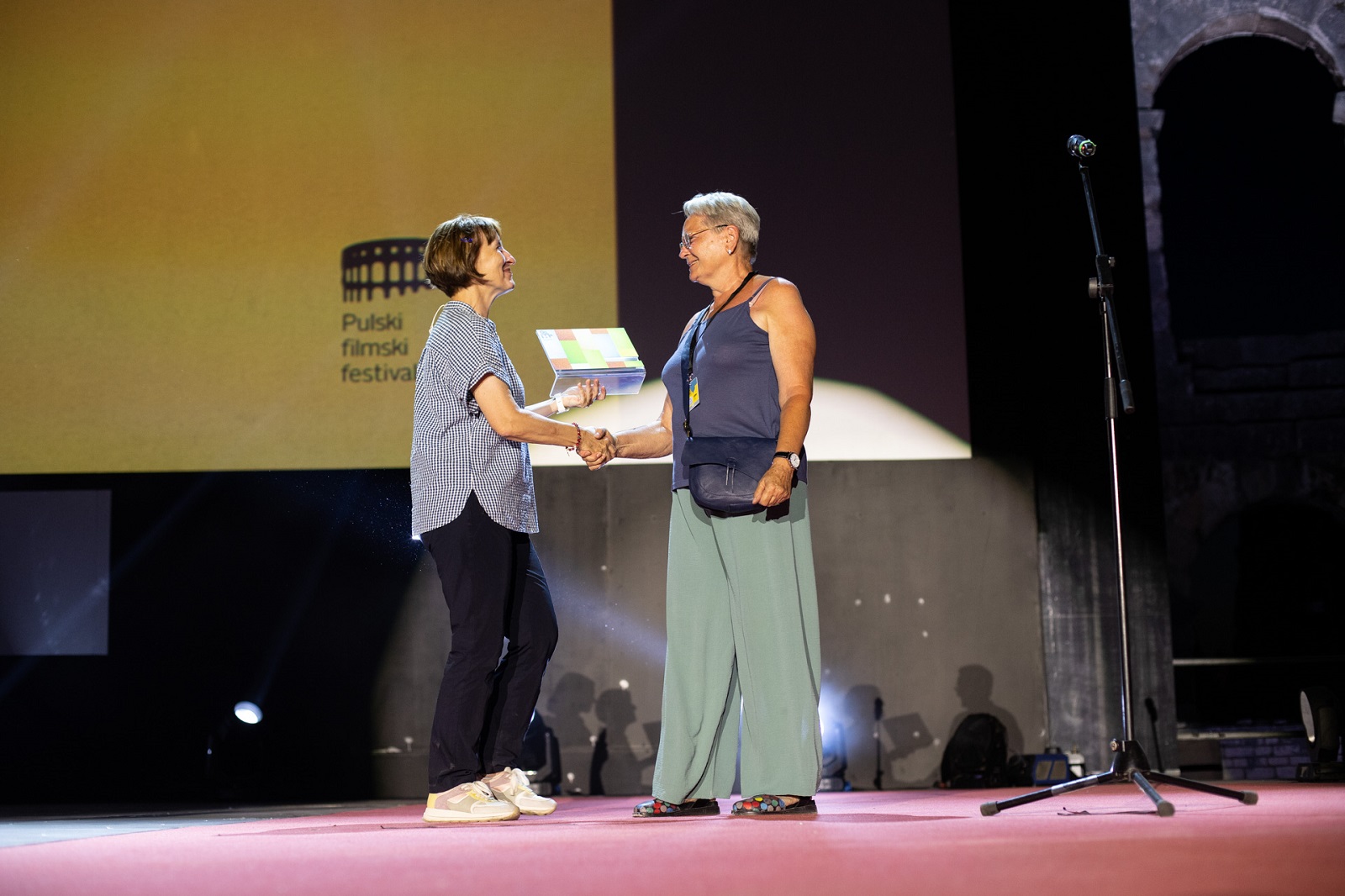 Before the screenings, the Drago Nusshol Award of the Filmmakers Association of Croatia was presented to film make-up artist Jolanda Buhin. Production designer Tanja Lacko presented the award.

Other than short films in the Student Programme, the Istrian National Theatre also saw the special screening of the film Fraulein, directed by Andreja Štaka, and at Kaštel, visitors watched the film Miracle, directed by Bogdan George Apetri. After a two-year break due to the pandemic, Ambrela Beach once again turned into an open-air cinema, and in the Dizalica Programme, visitors had the chance to  lie in beach chairs and watch the film A Tale of Love and Desire, directed by Leyla Bouzid. In the Pulica Programme, the film Beanie, directed by Slobodan Maksimović, was screened at Valli Cinema.

The traditional exhibition of Pula Film Festival Think Film: Cinemaniac XXI was opened at Pula City Gallery. This exhibition names, includes, and emphasises the work of female artists and the artistic work of women, and is formed as a temporary constellation of several recent works by female artists that create a dialogue of artistic phenomena within the group exhibition and open up the space of thinking and acting which deals with the position of female artists in the art system and artistic work, as well as their position in society. The curator Branka Benčić presented the work by Sanja Iveković, Lynne Sachs, Martina Meštrović, and Tanja Vujasinović. The exhibition is oragnised by Apoteka – Space for Contemporary Art, and co-organised by Waldinger Gallery and City Galleries Osijek. 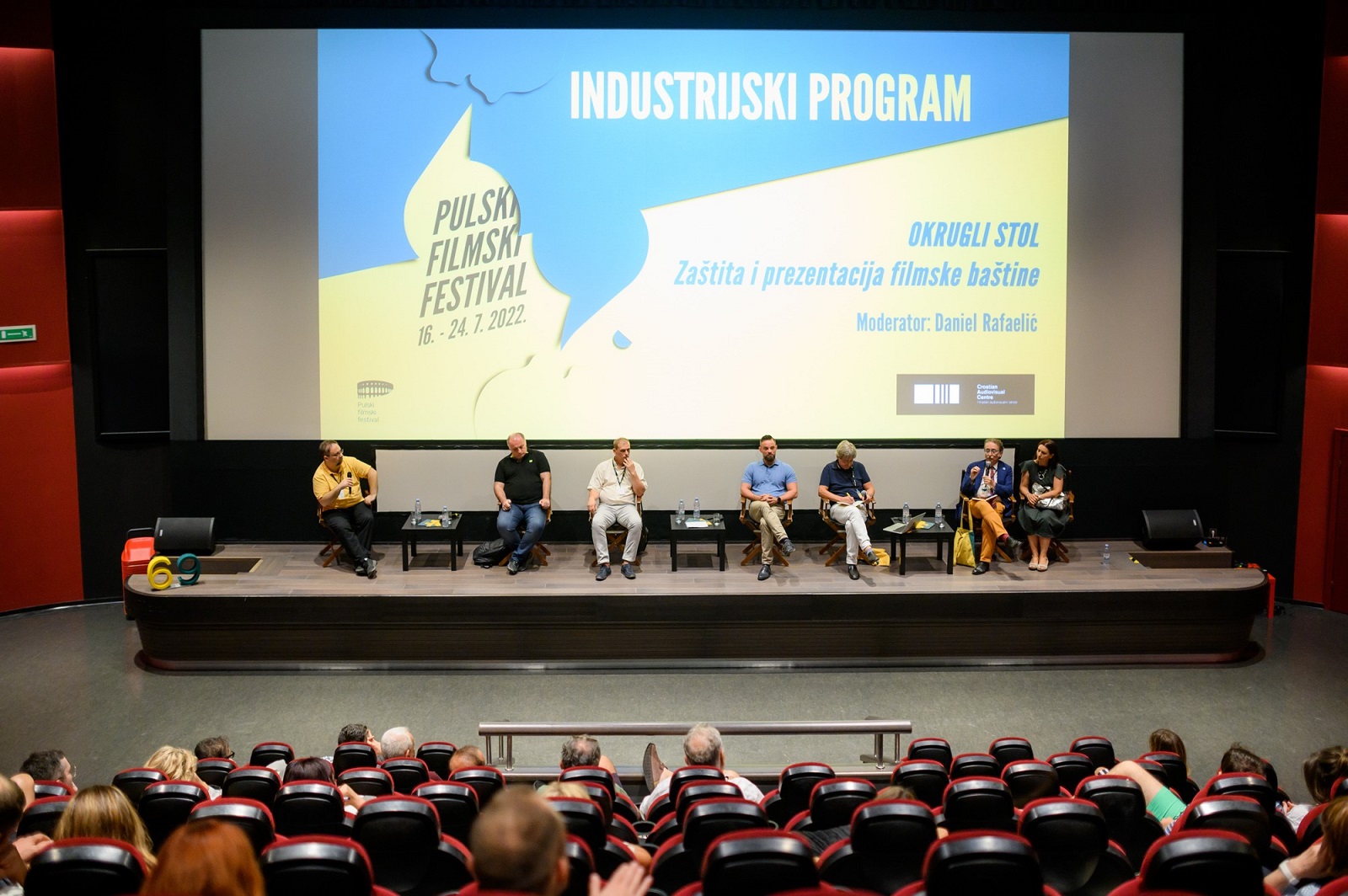 Sunday at Pula Film Festival was dedicated to film heritage. The Croatian Film Archive presented its latest book and the discussion was moderated by film historian Daniel Rafaelić. Dinko Majcen, the head of Croatian Film Archive, presented their future plans for promoting and marketing Croatian film heritage. This is especially important in the context of the latest book published by the Croatian Film Archive, Catalogue of Digitally Restored Films, which makes Croatian film material more available and present. Mladen Burić from the Croatian Film Archive presented the copy of the storyboard for the film Rondo, directed by Zvonimir Berković, which shows this film classic from a new perspective. One of the authors, Hrvoje Hribar, spoke about why Rondo is a timeless film, but also about this relationship towards the film and its author, Zvonimir Berković, who was his professor.

The Round Table on Film Heritage pooled experts from the field of film heritage, which the audience is less familiar with. Moderator Daniel Rafaelić opened the discussion with the topic of searching for a successful model of presenting film heritage and making it available. Saša Erdeljanovć from the Yugoslav Film Archive presented the Serbian model of public-private partnership in which the film archive cooperates with a telecommunication company in successfully restoring and marketing the most important heritage films. Krešimir Partl, State Secretary in the Ministry of Culture and Media, emphasised that the state is preparing to invest additional fund in protecting and restoring film with the goal of saving, but also presenting Croatian film treasure. He also underlined that we should not run away from the fact that Croatia has done very little in terms of heritage up until relatively recently; and continued to say that a critical review is the only way to be even more dynamic in that respect. Gianluca Farinelli spoke about the Bologna model of restoring film and emphasised the infrastructure at the basis of successful restoring of film. He commented on the example of colouring black and white film material from World War I in the documentary work by Peter Jackson, which is artistically very interesting, but unacceptable in terms of archival work. Chris Marcich, CEO of the Croatian Audiovisual Centre, explained that demand for heritage films produced in Croatia gave momentum to additional efforts in digitalising and promoting heritage film. He mentioned the excellent global step forward that the films Ninth Circle and H-8… made at the recent Cannes Classics and Venice Classics. The participants agreed that film heritage, as well as film restoration, primarily depend on quality experts, and less so on financial funds. Nikola Tanhofer’s film H-8… was screened following the round table.

A press conference moderated by director Jasna Nanut was held at the Circolo to mark the occasion of presenting the Fabijan Šovagović Award to actress Ljubica Jović. The award was presented by Anja Šovagović Despot.

The programmes, as well as the detailed schedule of screenings and all other information can be found on the official webpage of the Festival: www.pulafilmfestival.hr.